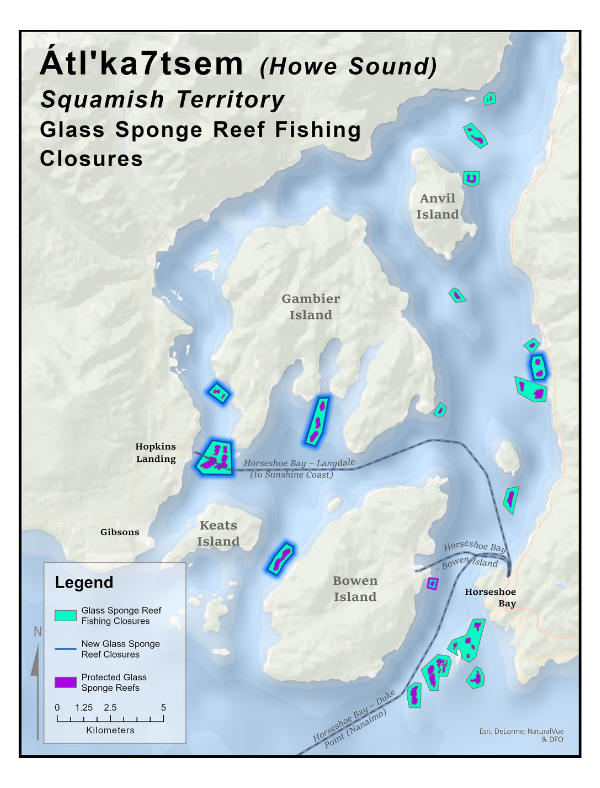 Map of Atl’ka7tsem / How Sound by Jacob Chila, GIS Analyst at CPAWS-BC

A new study led by Angela Stevenson at the University of British Columbia indicates that ongoing climate change is a serious and immediate threat to BC’s ancient glass sponge reefs. The Canadian Parks and Wilderness Society – British Columbia (CPAWS-BC) calls for the urgent establishment of marine protected areas (MPAs) for glass sponge reefs in BC.

Glass sponge reef ecosystems shelter rockfish and prawns and are efficient filter feeders. Healthy glass sponge reef marine protected areas can filter out up to 90% of bacteria from ocean water and work to keep carbon locked in the seafloor.

Fisheries and Oceans Canada (DFO), along with the Marine Life Sanctuaries Society (MLSS), recently verified five new living glass sponge reefs and one dead reef during scientific surveys in Howe Sound. These reefs need urgent protection if they are to adapt and survive against threats from climate change and human activity.

Footage of these reefs collected by Tavish Campbell, Wild First campaign spokesperson, show that while one of these rare ecosystems is flourishing, the other, located directly below an open net-pen salmon farm, has been smothered by waste and is entirely dead. The Canadian Parks and Wilderness Society (CPAWS) has been working to protect glass sponge reefs in BC for decades and calls this discovery a wakeup call.

“The discovery of these glass sponge reefs is both incredibly exciting and saddening,” said Ross Jameson, CPAWS-BC’s Ocean Conservation Coordinator. “To find a new, living reef is significant on a global scale. However, seeing the complete destruction of one of these reefs is devastating.”

Glass sponge reefs were thought to have gone extinct 40 million years ago, until living glass sponge reefs were discovered in Hecate Strait, BC in 1987. Glass sponge reefs are found only in BC and Alaska, making them globally unique to this coast. The reefs provide important habitat for a wide variety of marine species, including spot prawns, rockfish, and sharks, but are fragile and susceptible to damage.

“Glass sponge reefs are marine oases for many marine species on an otherwise barren, seafloor desert,” adds Jameson. “Failing to protect reefs jeopardizes the health of our entire coastal ecosystem. This discovery demonstrates the need to permanently protect the remaining glass sponge reefs throughout the province. It’s a wakeup call.”

“The footage of the two glass sponge reefs clearly show the effect the salmon farm has had on the reef below it,” said Tavish Campbell. “Where one reef is vibrant and full of life, the other is smothered in sediment and waste and appears dead.”

After more than two decades of campaigning by CPAWS, the glass sponge reefs of Hecate Strait and Queen Charlotte Sound were designated as a marine protected area (MPA) in early 2017. This MPA places restrictions on harmful activities protecting the reefs from direct damage by fishing gear and smothering due to sedimentation. Several other glass sponge reefs of varying sizes have been discovered in BC but have not received protection.

Given the fragile nature of these reefs and the current human activities in the area, Jameson believes that it is lucky that even one of these reefs is still alive. “With such limited restrictions on harmful activities along the coast, the discovery could just have easily been of two destroyed reefs,” notes Jameson.

To find out more about BC’s glass sponge reefs, the threats they face, and the work CPAWS is doing to protect them, visit www.glassspongereefs.com.